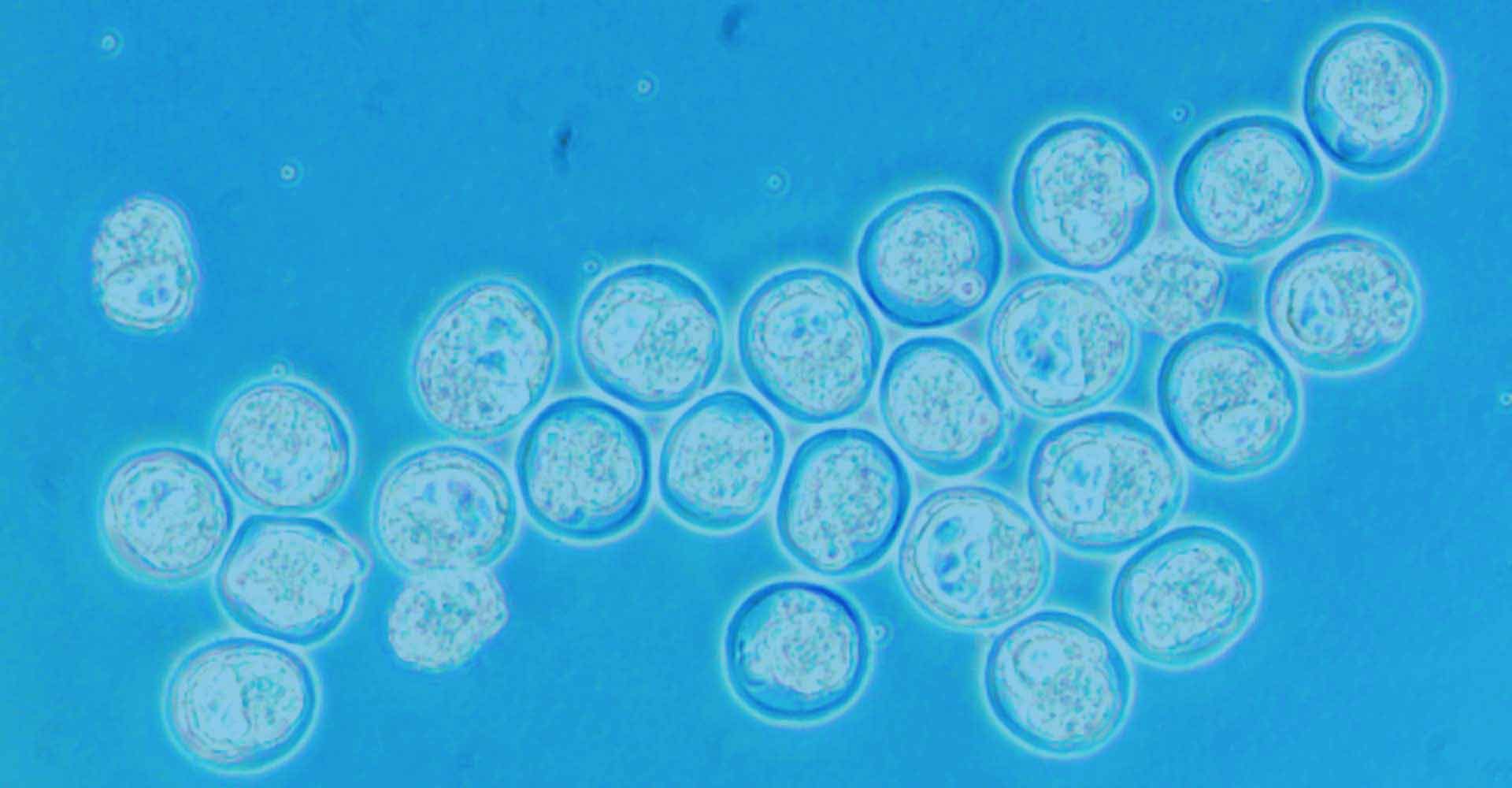 Turning off rodent genes to elucidate their function or model genetic diseases.

Given the high similarity between rodent and human genomes, the laboratory mouse and rat are preferred model choices to understand biological mechanisms of genes and diseases in humans.

Deleting or “knocking out” a relevant mammalian gene is a way to investigate its malfunction or its potential as a drug target in a variety of disease areas – in neurodegeneration as Alzheimer’s, cancer, cardiovascular diseases (CVD), inflammatory or metabolic diseases and many other fields.

In general, a knockout model can be employed constitutively or conditionally. Constitutive knockout is the permanent inactivation or mutation of a gene in every cell of the mouse or rat model. Depending on the use of the animal model, a conditional knockout might be a better choice, where gene deletion and mutation can be controlled in a time or tissue specific manner.
In recent years, many scientific consortia were aiming to generate mutant mice of every gene in the murine genome. Among others (such as the EUMODIC programme and the MGP programme), the International Knock-out Mouse Consortium (IKMC) created mutant ES cells.
Currently, the IMPC (International Mouse Phenotyping Consortium) builds on these efforts and generates about 20’000 mutant mice to analyse their phenotypic characteristics. However, this in vivo database is still far from complete and the mouse models themselves can only be accessed by research institutions.

We at PolyGene are specialized in difficult-to-achieve genetic modifications in mice and deliver fast and competitive. Our clients have the full freedom to operate on mouse models generated by PolyGene.
GET A QUOTE

Why Constitutive Gene Knockouts?
The original motivation for generating complete, constitutive knockouts was the elucidation of an otherwise elusive gene: can the disruption lead us to the function of the protein, can it point to the pathway in which this gene is active? Meanwhile, another aspect gained importance: as drug treatments might be directed at reducing this gene’s expression, will we expect a phenotype from ablation of the gene in the pathway we investigate for treatments? In other words, a knockout is the validation of a gene as a drug target.
Since the advent of easily accessible techniques for conditional knockouts in mice, constitutive KO’s were more rarely generated. Currently, we generate constitutive knockouts predominantly for species that are less easily accessible – rats and rabbits.

How is a Constitutive Gene Knockout generated and how long does it take?
There are several ways of disrupting gene function. In constitutive approaches and via homologous recombination, we may target and excise exon 1; or a downstream exon, if the precise initiation exon is not certain. Protein structure and coding frames must be considered. Careful designs always include careful supporting analysis of hidden genomic elements that should be left intact. PolyGene offers ES cell and nuclease (CRISPRs, TALENs, etc.) based knockout model generation.
The generation of a constitutive knockout mouse model via CRISPRs will take approximately 6 month. If you decide to choose the traditional way via ES cell based targeting it takes up to 1 year.
More information can be found at Gene Targeting Service Details.

The gene of interest or the relevant exon (GOI) is deleted constitutively.

Why Conditional Gene Knockouts?
Global inactivation of a gene can sometimes lead to embryonic lethality (about 15% of knockout mouse models have mutations resulting in developmental lethality, according to the National Human Genome Research Institute, www.genome.gov); or sometimes, mimicking a defaulting gene action is desired by inducing global inactivation in adult age. In other cases, the disruption of a gene only in certain tissues is the goal of a genetic investigation.
Here’s when we target the gene in a manner that leaves it intact and fully functional, but allows for conditional inactivation upon combining with publicly available mouse strains that are pre-validated for this purpose. Conditional targeting also allows to irreversibly (“constitutively”) disrupt the gene in the germ line, upon appropriate breeding.

How is a Conditional Gene Knockout generated and how long does it take?
At PolyGene, we use a combination of the Flp/FRT and Cre/loxP systems to conditionally knock out genes. Generally, we generate mice with custom designed gene mutation(s) by gene targeting strategies either in ES cells or via CRISPR/Cas9 pronuclear injection. We flank your locus with loxP sites (these are recognition sites of Cre recombinase excising the DNA inbetween); we do so by targeting that region with a recombination vector containing the loxP sites. Typically, a few relevant exons and up to 2 kbp are flanked. Due to specialized base vectors, construction is almost as easy, and as rapid, as building a constitutive targeting vector. 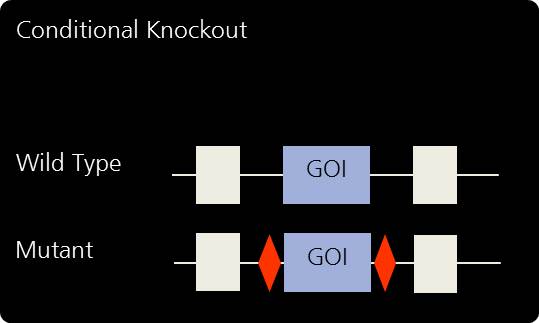 Flanking the GOI by recombination sites (e.g. loxP, here in red) allows its deletion in a tissue-specific or inducible manner.
The resulting rodent contains in all cells the floxed allele but is phenotypically wild type.
These mice are bred to specific Cre strains giving you the control over the time and location where your gene is deleted. The Cre/loxP system is a highly reliable and efficient tool in use since the early 1990’s, and users can therefore build on a large library of Cre transgenic mouse lines that have been generated and entered into the public domain (e.g. JAX repository).
The generation of a conditional knockout mouse model via CRISPR/Cas9 will take approximately 6 month. If you decide to choose the traditional way via ES cell based targeting it takes up to 1 year.
More information can be found at Gene Targeting Service Details.

Case Study: Why are we getting hungry? – mPer2 gene function in circadian clock rhythm
Recently, the exciting work by Prof. Urs Albrecht went to press (Liver-derived ketone bodies are necessary for food anticipation), based on a conditional knockout mouse for the mPer2 gene involved in the circadian clock rhythm in humans.
The researchers bred the conditional KO with three Cre lines. First, a constitutive knockout of all cells in the mouse (under the ubiquitous CMV promoter), second, a specific inactivation in the central nervous system (under the brain specific Nes promoter) of the mPer2 gene, and third, a loss of Per2 in hepatocytes (liver specific Alb1 promoter), a liver-specific cell type. The results are striking.
The circadian system has given animals the ability to anticipate recurring food availability at particular times of day. So far it is not known where food anticipation (FA) signals originate and what role components of the circadian clock might play. Albrecht and coworkers showed that liver-specific deletion of Per2 in mice abolishes FA, an effect that is rescued by viral overexpression of Per2 in the liver. RNA sequencing indicates that Per2 regulates β-hydroxybutyrate (βOHB) production to induce FA, leading to the conclusion that liver Per2 is important for this process. Unexpectedly, they show that FA originates in the liver and not in the brain. However, manifestation of FA involves processing of the liver-derived βOHB signal in the brain, indicating that the food-entrainable oscillator is not located in a single tissue but is of systemic nature. 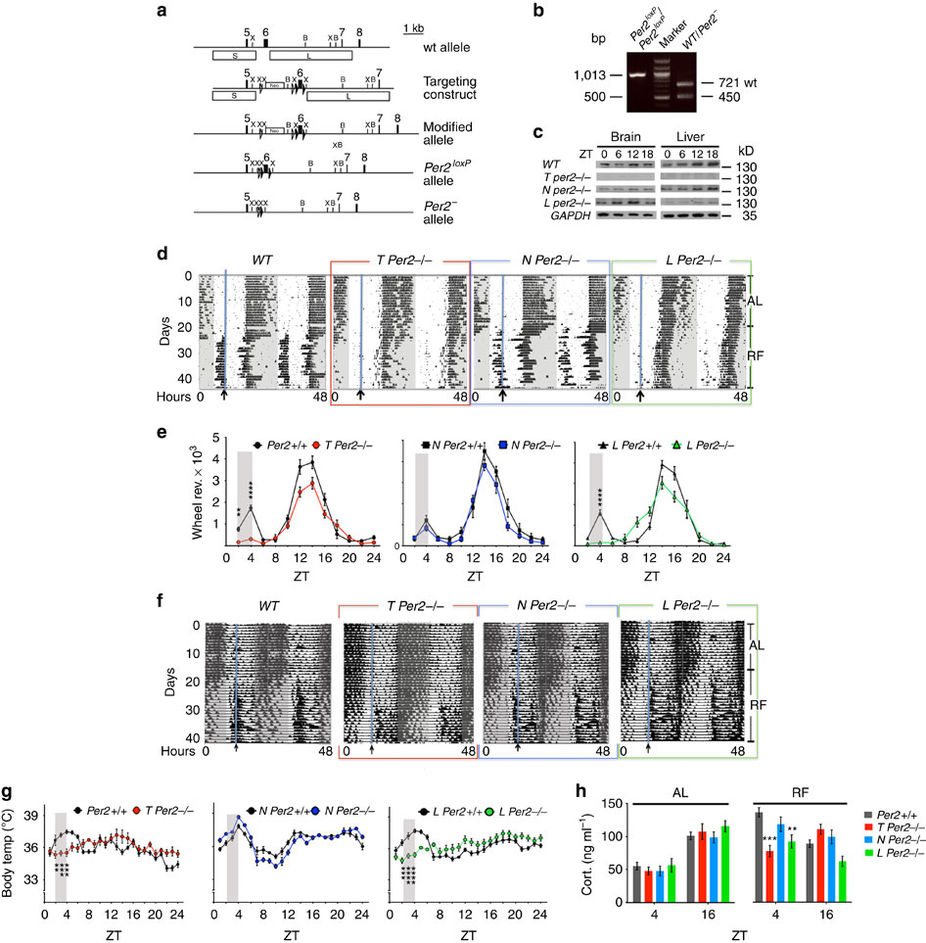