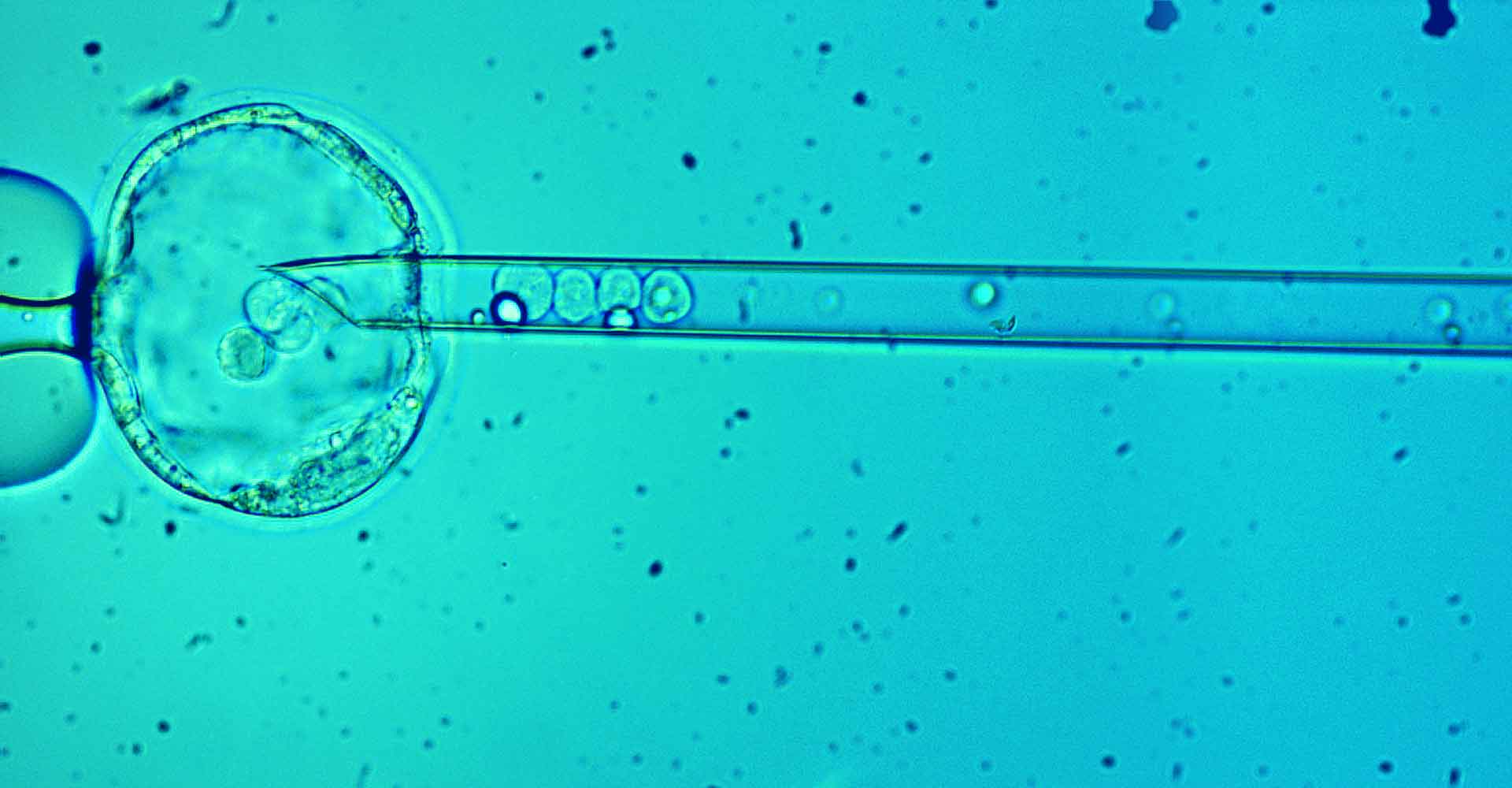 Gene replacement and humanization by knock-in.

Gene targeting by knock-in can mean to generate a point mutation corresponding to a human morbid gene; or to use the genomic regulation and insert a coding frame – a fluorescent marker, a recombinase, or another foreign gene – instead of the previously present gene.

Typically a knock-in is done in mice since the technology for this process is more refined and there is a high degree of shared sequence complexity between mice and humans.

We at PolyGene are specialized in difficult-to-achieve knock-in strategies in mice and rat. We offer constitutive and conditional knock-in strategies. Our clients have the full freedom to operate on knock-in animal models generated by PolyGene.
GET A QUOTE

Why Constitutive Gene Knock-ins?
For many scientific questions regarding the function of a certain gene, the replacement of a gene by a reporter gene (eGFP or lacZ) or the insertion of a mutation (i.e. a human point mutation or deletion) is much more promising than inactivation of a gene. The replacement by complete human cDNA allows humanization of a gene of interest.

How is a Constitutive Gene Knock-in generated?
To introduce a point mutation to a mouse gene, we generate a targeting vector carrying the mutant allele, and containing a selection cassette for later excision, and this is done in ES cells. Alternatively, the targeting can be attempted using CRISPR/Cas9 technology, and without a screening cassette.
To insert a cDNA, we do the same; however, CRISPR targeting is here even less efficient, and special care is mandatory to grant proper expression – the placing of the cassette, the use of proper UTR’s and introns, etc. If possible, we recommend in vitro testing.

The GOI is replaced by a mutant version, or by a marker cDNA.

Why Conditional Gene Knock-ins?
As for knockout models, the conditional and/or inducible replacement of a gene by another gene using the Cre/loxP-System opens up a number of possibilities for the investigation of different scientific problems. Constructs for conditional knock-in are much more complex than for constitutive strategies. The expression of the gene must be unchanged prior to Cre recombination, but the additional gene should be expressed under the same conditions as the wild type gene after replacement.

How are Conditional Gene Knock-ins generated?
Depending on the gene structure, different approaches can be used. The combination of two incompatible types of lox sites (loxP and lox511) makes the stable inversion of a gene possible. Using mutant lox sites that are altered before and after recombination (lox66/lox71 system) is a valid alternative also often used in our lab. The insertion of the cDNA in two different versions is another good approach (“minigene targeting”). In the design of such strategies, we work in close coordination with the customer to assure that the strategy is matched their needs. 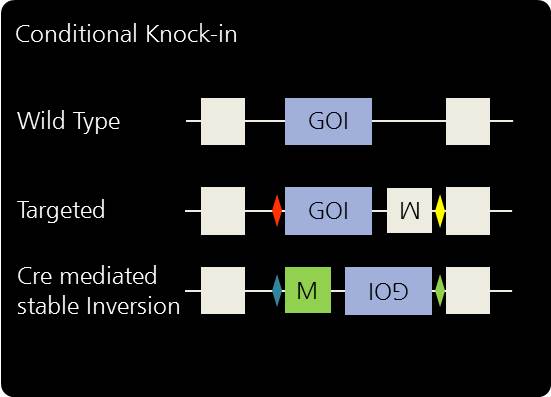 The example shows stable, irreversible inversion by the use of mutant lox sites. Stable reversion to wild type can also be achieved when using additional Cre or Flp mutants; or minigene approaches allowing for conditional activation of a foreign cDNA. For all strategies, tested base vectors are available at PolyGene.

Mice (or rats, rabbits) carrying certain human genes or loci (humanized mice, rats or rabbits) are increasingly important for pharmaceutical drug development and drug testing. This is because many mouse proteins differ in the overall protein structure from their human counterpart, meaning that e.g. drug binding affinities generated on the mouse protein cannot directly be used for studies in human.

The cDNA Approach.
We target the human gene (WT or mutant) into the endogenous mouse locus. It will be expressed under the transcriptional control of the endogenous mouse promoter, and therefore transcribed in exactly the same way as the native mouse gene.
The BAC Approach.
We inject a human BAC (piggyBAC) carrying your human gene of interest into mouse zygotes for the generation of transgenic humanized mice. Depending on the size of the BAC, the BAC may contain only the coding region of your human gene of interest, or also the human promoter region. Generally, the human expression system is equivalent to the mouse regulation, and we express equivalent expression profiles.

Methylmalonyl-Coenzyme A mutase apoenzyme (MCM, MMCoA) catalyzes the conversion of L-methylmalonyl-CoA to succinyl-CoA using adenosylcobalamin.
In humans, deficiencies in this gene result in a severe metabolic disorder called methylmalonic acidemia, or methylmalonic aciduria (MMAuria). Both, complete ablations of the gene, as well as milder forms represented by variants with impaired function, are inherited as an autosomal recessive disease.

Methylmalonyl CoA (MMCoA) is a catabolite of propionyl CoA, and its accumulation leads to a life-threatening and chronic ketoacidosis.
The aim in this study was to generate novel mouse models of MMAuria that survive through adulthood but show clear biochemical and clinical signs of disease. PolyGene generated mice by knocking in a missense mutation to the murine Mut gene ( Mut-p.Met698Lys mutation) by embryonic stem cell targeting. To generate Mutko/ki mice, female Mutko/wt were crossed to Mutki/ki males.

Generation of KI allele.
A, based on the wt mouse Mut gene, a targeting construct was generated to replace the Mut gene region spanning from introns 8 to 12, a missense mutation (p.Met698Lys) was inserted. Homologous recombination and Flp deletor breeding resulted in the final targeted KI allele with the mutation and one remaining FRT site.
B, Southern blotting of targeted clone 12H5.
C, upper panel, genotyping PCR of ear biopsy DNA for the KI allele. The asterisk indicates an additional heterodimer band as confirmed by Sanger sequencing. Lower panel, genotyping PCR of KO allele.
The most striking phenotypic sign in these mice was growth retardation, which is likely a correlate of failure to thrive described in human patient.

I’m very happy with your services and all the communication. I thank you for your great efforts during generation of our mice!
Dr. Ming Xiu-Fen, Université de Fribourg