SwitchItOn is a 3-year project funded by the EUREKA framework, aiming the development of novel genomic switches. Our consortium consists of four research groups, coming from different scientific backgrounds all over Europe. All of us are enthusiastic researchers visioning a future in which the genomic switches as a major toolkit, will assist in genetic disease researches.

SwitchItOn will develop novel genomic switches needed for the generation of precisely such cellular and animal models. The switches will allow turning on and off multiple (trans)genes independently of each other in vivo. First prototypes of three inducible systems are available, E-Rex, Phlo, & RuX, which can regulate gene expression by adding erythromycin (Ery), phloretin (Phlo) or RU486 to the system. In order to bring these expression systems to the market, all three systems need optimization in terms of increasing tightness, inducibility, sensitivity and reversibility..

An updated version of the 2019 Horizon 2020 Societal Challenge 1 program has just been published by the European Commission. PolyGene, a very active and experienced EU project partner, is searching for consortia to join. We will present our services and collaboration opportunities at the Brokerage for Health event on the 3th and 4th of September 2018 in Oslo, Norway. For details please visit:

Let us meet there and join forces to advance European health research!

SwitchItOn will generate a toolbox of novel genomic switches, opening new avenues of experimental design for many areas of research, including systems biology and cancer biology. This breakthrough technology will allow for the first time for the regulation of multiple genes of interest, transgenes or endogenous genes, independently of each other, not only systemic, but also cell type and tissue specific, developmentally regulated and fully reversible. In order to bring these expression systems to the market, all these systems will be optimized by increasing their tightness, inducibility, sensitivity and reversibility.

For further information on the progress, consult our website on our Unique and powerful systems for inducible gene expression control.

T-cell leukemia is rare blood cancer in the own immune system. T-cell acute lymphoblastic leukemia, a special form of T-cell leukemia, was investigated by Belgian researchers with striking findings.

In a recently conducted patient study, a R98S mutation in ribosomal protein L10 recurred in 8% of children with T-cell acute lymphoblastic leukemia.

This protein plays an important role in the JAK-STAT signaling pathway which transmits chemical signals from the extracellular matrix into the nucleus and finally influences the transcription of DNA and expression of genes.


The three main components in the JAK-STAT pathway are the cell surface receptor (JAnus Kinase) and two Signal Transducer and Activator of Transcription (STAT) proteins.

The group of Kim de Keersmaecker from KU Leuven in Belgium investigated this mutation in greater detail by creating a customized gene knock-in mouse model with PolyGene.

In the transgenic R98S mouse, several proteins in the oncogenic JAK-STAT pathway are overexpressed, and increased sensitivity to clinically used JAK-STAT inhibitors like pimozide was observed. These findings link a ribosomal mutation to the JAK-STAT pathway, adding to the rapidly expanding repertoire of oncogenic mechanisms exploited by ribosomal defects in cancer. Moreover, the JAK-STAT cascade was identified as an attractive therapeutic target in RPL10 R98S positive T-cell acute lymphoblastic leukemia.

Interested in knock-in services for your gene(s) of interest? PolyGene offers:

Sudden cardiac death is caused by arrhythmias, which is defined as any deviation of the heart beat. Electrical heart disease leading to arrhythmias represents a major public health issue.

The histidine-rich calcium-binding protein (HRC) Ser96Ala variant is known as potential biomarker for sudden cardiac death in patients with a heart muscle disease. HRC is a regulator of sarcoplasmic reticulum (SR) Ca2+ uptake, storage and release. The SR is a membrane bound structure found within muscle cells.

An HRC-Ala96 mouse model using transgenic techniques was developed previously. However, transgenesis has limitations: random positioning, unknown copy number and dependent expression of the inserted DNA. Other issues in the HRC-Ala96 transgenic model arose at the developmental expression of the desired gene dictated by the a-MHC-promoter and the heterologous human gene expression.
To overcome the limitations of HRC overexpression, PolyGene employed a gene targeting knock-in strategy and generated a mouse model carrying an HRC mutation at position 81 (serine 81 to alanine), the homologous region of the human HRC (serine 96 to alanine). This humanized mouse model and subsequent pathophysiological analyses were now published.
(Adapted from Tzimas et al. 2017) 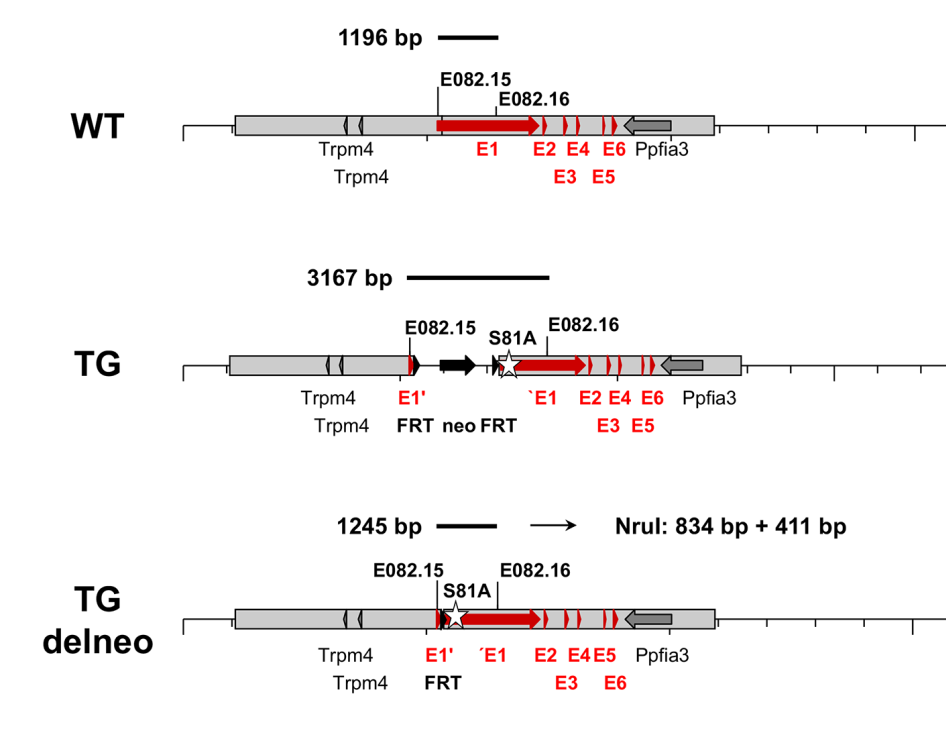 Generation of the HRC-Ser81Ala knock-in mouse model.
Schematic representation of the WT and targeted (TG) HRC-Ser81Ala allele. The targeting vector contains two arms for homologous recombination, separated by a FRT flanked neomycin cassette. The Ser81Ala point mutation is introduced in exon 1 of HRC. Mating of the targeted mice with FLP deleter mice removes the neomycin cassette and results in the generation of targeted and neo-deleted mice.

The generated mutant HRC mouse is physiologically very relevant to the human condition, since the murine endogenous HRC gene remains intact except the specific Ser81Ala mutation. It showed increased mortality in the absence of structural or histological abnormalities, indicating that early death may be arrhythmia-related.
This strongly suggests that indeed Ser96Ala in humans is associated with depressed cardiac function and possible cardiac-related sudden death.

This research was funded by EUTrigTreat, an international consortia founded by the EU, to address both clinical and basic sciences questions about dangerous arrhythmias by translational and interdisciplinary strategies.

Sclerosteosis is a rare autosomal recessive bone disorder marked by excessive bone growth of the skull and tubular bones. Up to now, research showed: sclerosteosis was caused by loss-of-function mutations in the SOST gene, encoding sclerostin.

Recently, researchers within the european SYBIL consortium identified disease causing mutations in LRP4, a binding partner of sclerostin, in three Sclerosteosis patients. Upon binding to sclerostin, LRP4 can inhibit the canonical WNT signaling which is known to be an important pathway in the regulation of bone formation.
A Lrp4 mutated sclerosteosis knock-in mouse model generated by PolyGene showed to be a good model for the human sclerosteosis phenotype. This model will be used for further investigation of the LRP4 regulating bone formation mechanism.

This work was published in the Journal of Bone and Mineral Research on May 6th 2017 by the group of Prof. Wim van Val located at the Center of Medical Genetics at the University of Antwerp in Belgium.

Every year, ECTS creates a platform for researchers and clinicians working in the musculoskeletal field to strengthen collaborations and discuss the latest advances.
PolyGene brings great expertise in developing relevant in vivo models of rare skeletal and common skeletal diseases to many european research institutes (e.g. within the EU-funded SYBIL program).

The next PolyGene Seminar will take place June 1th at the Swiss institute for regenerative medicine (SIRM) in Taverne – Torricella, Switzerland.

We are pleased to inform you, that we continue our seminar series:
Join us for a special talk at the University of Bern, Thursday, April 27th at 1:15pm.
Please find more information here: Innovative Genetic Technologies in Transgenic Model Generation.

Join PolyGene for a special seminar on „Innovative Genetic Technologies in Transgenic Model Generation“. The event takes place April 19th 2017, 5pm, University of Zurich Y23 G04. The first talk will focus on CRISPR and transgenic rodent model services presented by Stephan Sonntag. In the second talk, Péter Horváth will give insight in state-of-the-art inducible gene expression systems and PolyGene’s in-house research. We are looking forward to meeting you there.

Lets start with a quote from Didier Picard from University of Geneva and Chair of the LS2 Annual Meeting 2017 in Zürich:


If you are a life scientist in Switzerland, this is the place to be and to be seen, at least once a year. Its dense program is designed to appeal to everyone, to give everyone the opportunity, again at least once a year, to get exposed to great science in their own field, but also to exciting and thought – provoking stuff from different fields or from the interfaces between science and the real world. The LS2 meeting is a great opportunity to network, to meet your old buddies from your undergraduate days, graduate school, and committees you have served on, your former professors, many of your suppliers, your current and future collaborators, and perhaps your future boss. 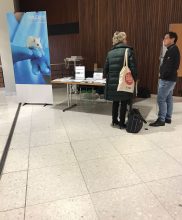 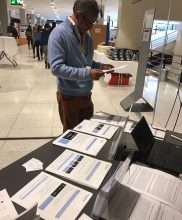 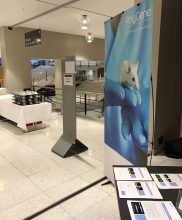 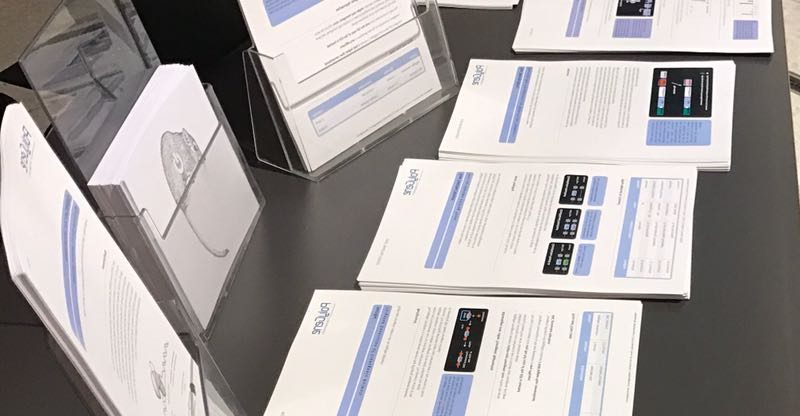 We had a great time there, meeting indeed old friends and customers but also created new bonds to possible future collaborations.
Our CEO Doron Shmerling has been an invited speaker within the Session “Start a start-up”. He brought his longlasting experience in managing a small enterprise to more than 150 students.

Thank you for your work, we are currently establishing the lines. We are very satisfied with your work.
Dr. Marco R Cosenza, DKFZ